So after my disaster with the garden furniture, why would I do DIY again? I will repeat just how much I despise DIY, and unlike TFS I am really not interested in learning those sort of skills as I know I would rather have a larger nest egg and pay someone else to do it!

The case for DIY.

So, when I went to close one of the blinds the other night something went wrong. As I was lowering the blind, all of a sudden the one side started going up again. I tried reversing the pull again but no joy – seems something in the mechanism was broken.

There was nothing for it. I left it as it was and went to bed! 🙂

The following day, I played through the options in my mind.

So, the worst case was I would have to pay someone anyway, I decided to have a go. I moved everything out of the way so that I could take the blind down (the easy part). Holding an approximately 5 foot wide blind in one hand whilst trying to work the mechanism in the other is not easy! Having managed that, I was able to work out which section of the mechanism was not working properly.

To cut a long story short (I know, too late) – I ended up taking the mechanism apart and untangling the knots in the string and putting it back together. I guess it probably took about 45 minutes in total – result! I reassembled the mechanism and went to test it before I put the blind back up.

F@*k. I had managed to reassemble the last two rollers the wrong way, so whenever I tried to pull the blind some went one way, others went the other way! I knew there was a reason I didn’t like DIY! Back to square one – the mechanism was taken back apart, the two rollers were turned around and the mechanism put back together. Surprisingly fiddly it turns out this DIY lark.

So, second attempt to test it.

It worked! So, feeling very smug with myself I managed to get the blind back locked up over the window and everything put back. I am happy to report that now, a week later, it is still working! I am really quite pleased with myself for fixing it – and overall it probably took about an hour – it just felt a lot longer!

The case for not DIY.

We needed some things doing in one of the rooms in our home. The size and scale of it all meant there was absolutely no way I was even going to consider doing this myself!

Now the electricals, cutting holes in walls and ceilings and replastering back up is something I would not even enter into trying to do myself. I am sure some people would love to try it and learn new skills, but for me no thank you!

The other part was some fairly major work in the room itself. Now if I had a woodshed, worktable, carpentry “stuff” (saw and the rest – no idea what else you need) then yes, I expect there is an outside chance that I could do it myself, however there are two main reasons why I chose not:

So, with everything considered, it was decided. We would get someone to do it for us! We had a couple of people come round to give suggestions and quotes. We ended up choosing one of them, and they have done all the measurements, and the design is complete. Yes it is going to be more than it would have cost me to buy all the equipment and the bits, but I am fairly certain it will look a lot better! Total time to do the entire room? 3 days on site. Ok add in a day to move everything out before, and a day to put everything back, but even still that is WAY faster than I could have done it – and I wouldn’t have dared touch the electrics.

So, they are preparing the stuff, and come October they will do the entire installation for us – I can’t wait. It does however mean a big dent on the savings rate however the funds will come from cash reserves (something you shouldn’t do) and we will rebuild them over time so I will continue to put money into the markets – using the income generated to help refill the cash buffers.

So, what is my take away from all this? Ignore DIY and go to the pub! After a recent visit to the pub I “accidentally” popped into the local majestic to grab a few more beers.

What do you know – I found out that they sell off the beer stock as it’s getting close to its sell by date. I got the below case for £10. Not at all bad – and let’s face it – the competition they were part of finished in Feb ’17 – so I don’t think that they will magically go off on the night of the 31st August – but I guess I could drink them all to be safe! 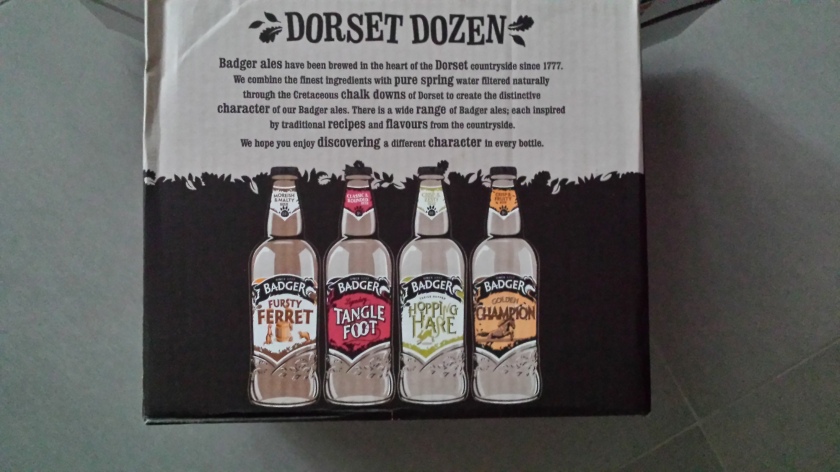