So the month has ended and the festivities have finished, the grim reality of the workplace is back in full swing again (and more), and so its time to  see how soon I will be able to escape, and compare it to the usual index of choice. This enables me to see how I am doing. As I covered in my “How I measure performance” – basically I take the value of the portfolio at the end of last month, add on any contributions for the month, and that was my starting value. End value is the value at the end of the reporting period. Simples 🙂

So, performance wise in December, I failed to keep tracking each week so it is a bit of a surprise towards the end of the month, so let us have a look at what has happened….

So overall not too bad a month – ISA2 continues to be the laggard here, but then I am taking an income from this so it’s not surprising that it didn’t have such a good performance.

All in I can’t really grumble at those numbers, but it always helps to take a view of the bigger picture, so once again a pretty graph time! 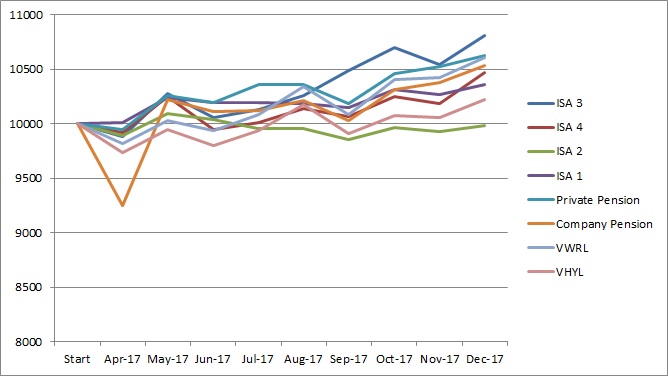 So a nominal £10,000 invested in all the vehicles above (I have ignored indexes as I would need to track these individually via a tracker rather than just where they are, the above is things you could technically buy).

So in first place, by a reasonable amount, is my actively managed ISA. That is satisfying, although I expect performance to start to lag as I move more into trackers and Investment Trusts to balance the size. And who knows, have I just been lucky?

Second, by a whisker (although maybe by a whisky would be better, but I digress), is my personal pension, managed by my IFA. Yup, even when you take in all the charges associated, my IFA still isn’t doing too bad – although maybe I won’t tell them that….

In third place, VWRL. Looks like maybe a good choice for the Go T’ Pub ISA after all!

So I am sure some may ask is my IFA just a closet tracker for VWRL? Well I can happily say no as I know what is in it. VWRL has approximately 50% in North America, my pension has about 20% – the differences go on.

All in all my total retirement pot grew by close to 2% for the month, including additional funds, so not too bad.